Shadow The Hedgehog is an black hedgehog with red stripes and the Chaos powers, he's known as the world's "Ultimate Life-Form". He likes nothing (it says that in the bio of Shadow in SaSASR). Shadow is an rival of Sonic the Hedgehog, they both start a rival race, and fight. He is created by the Dr. Eggman's grandfather, Gerald Robotnik. Shadow have been angry because the G.U.N Soldiers shot Maria Robotnik by the accident, he must get revenge, but can't.

His first appearance is in Sonic Adventure 2. His age is unknown and it's because he's "created" by the proffesor.

Shadow stole the chaos emeralds and teleports away so people may not see him stealing a chaos emerald. The police or G.U.N Soldiers, have arrested Sonic because they through he did that, but Sonic says it's not him. People are in fact confused who's that hedgehog that stole Chaos Emeralds.

In his own game called "Shadow the Hedgehog", in three months has passed after the Sonic Heroes events, he was suffering from amnesia as his memory and the dark past shrouded in mystery and so he must find all of the Chaos Emeralds to uncover his true past (with the player's choice of an ending). 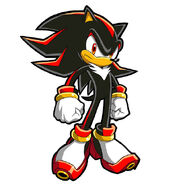 His appearance in Sonic X

Shadow, before he speeds up with his Chaos Control

Sonic and Shadow in the intro of SA2:B

Trivia on all pages are really disappointing, aren't they?

Community content is available under CC-BY-SA unless otherwise noted.
Advertisement